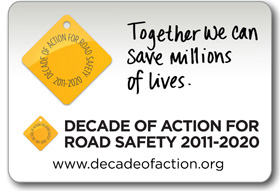 Representing the number of deaths on Queensland roads in 2010, 247 senior Springfield College students gathered today to mark the official launch of the United Nations’ (UN) first ever “Decade of Action for Road Safety 2011-2020”.

Around the globe, in every time zone, there will be similar launches of the United Nations General Assembly-declared “Decade of Action”. The Decade initiative provides an opportunity for global action to reduce the number of road fatalities and injuries around the world, which expert’s estimate will take the lives of 1.9 million people annually by 2020.

The organiser of today’s student display, the Brisbane-based Fatality Free Friday Road Safety Foundation (FFRSF), is a registered supporter of the UN Decade of Action.

According to the World Health Organization (WHO), during the course of the Decade, five million lives could be saved and fifty million serious injuries prevented if road safety programmes are implemented worldwide. The launch of the UN Decade of Action is being jointly organised by the WHO together with the FIA Foundation, an independent UK charity which runs the Commission for Global Road Safety and which led the call for a UN Decade of Action.

“Our high school students are Queensland’s future drivers so it is vital that we educate them now on the critical importance of road safety so they can help lead the charge and be a part of the Decade of Action,” said Mr White.

“The Foundation is proud to support the UN Decade for Action. We believe road fatalities and injuries are preventable and that all road users play a role in helping to improve safety in our communities and on our streets.

“We hope our activities during May, including the World’s Largest Driving Lesson (4 May) and Fatality Free Friday (27 May), will help to focus attention on the importance of road safety and encourage Australian drivers to think consciously about driving safely every time they are behind the wheel,”

The inaugural Awards programme will be staged in November 2011 and will acknowledge the achievements of leading road safety stakeholders including educational institutions; community organisations; local and state governments; the media; the transport and automotive industries and the corporate fleet sector.

“The Awards programme will encourage new standards of excellence in the road safety industry and in turn, will act as a catalyst to increase road safety activities across the nation,” he said.

The Awards are sponsored by Caltex, the largest refiner and marketer of petroleum products in Australia.

Award registrations open on 12 May 2011. To learn more about the Australian Road Safety Awards visit www.australianroadsafetyawards.com.au.