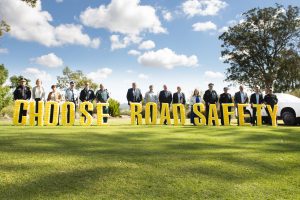 With two thirds of road deaths occurring on regional roads, the ARSF has conducted new research which reveals one in three Queensland drivers admit they are more likely to undertake risky behaviour on rural roads.

As a powerful reminder of the fatal consequences when taking risks behind the wheel, more than 700 large yellow flowers were laid in memory of every life lost on rural roads last year. The solemn installation comes as the research report shows that not even having children in the car is a deterrent for dangerous driving behaviour on rural roads.

ARSF Founder and CEO Russell White urged Australians – both regional and city based – to take ownership for their role in reducing the rural road toll.

“While there are a number of factors that contribute to the regional road toll, it’s everyday Australians that hold the key to safer roads,” Mr White said.

“The research has told us that Queensland drivers are taking risks on rural roads because they’re either less likely to get caught or perceive there to be fewer dangers.

“We will continue to see a significant and unnecessary loss of life on regional roads until we make a collective effort to shift this mentality so that safety is front of mind for all road users.”

The ARSF research has also highlighted the disparity in attitudes and behaviours between rural and city drivers.

According to the data, metro residents in Queensland are more likely than rural drivers to engage in dangerous behaviour on rural roads.

However, the research also showed that one in three road users recognised that a shift in attitudes and behaviour would have the biggest impact on the road toll.

“Despite making up only 16.5 per cent of the nation’s population, regional road deaths account for a staggering two in every three of the national toll. Since this same time last year, the regional road toll has jumped 13.8% across the country as we see an increasing number of rural casualties, ” Mr White said.

“Acknowledging that everyday road users have a personal responsibility is the first step and it’s our hope that Rural Road Safety Month will encourage drivers to choose road safety and turn this sentiment into real action.”

Suncorp’s Executive Manager of QLD Compulsory Third Party (CTP) Insurance Dan Wilkinson said the month of action was a timely reminder for all drivers to take an extra moment to avoid disaster on regional roads.

“Every day our team witness the impact road trauma has on our customers and regional Queensland communities, which is why we are backing action. Safe roads are critical to keeping our regional and rural communities great places to live, visit and work – so I encourage each of us to take a personal pledge to drive safely not just throughout the month but well after the campaign finishes,” Mr Wilkinson said.

Following community support of last year’s inaugural Rural Road Safety Week, the initiative has been extended to a month-long campaign from August 1 to 31, with the ARSF imploring locals to choose road safety and take ownership for their role in reducing the regional road toll.

Backed by the Australian Government and long-time sponsor Suncorp, businesses, community groups and individuals are encouraged to choose road safety and get involved by hosting a local awareness raising event.

For more information or to find out how to get involved, visit arsf.com.au.